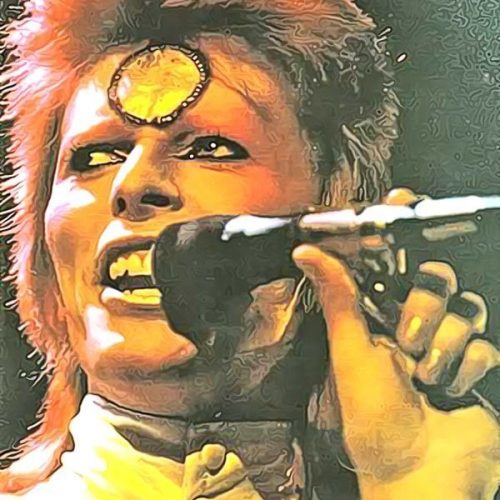 the boy in the bright blue jeans

I remember the day well, every book that I read about Bowie fans from this era always talks about how grey it was at that time, well my life was certainly anything but grey. But, as it happens, this particular day was grey, the sky was dull and it was spitting with rain as we walked through an East London street from another age. On one side of the road was a railway viaduct with small businesses, mainly mechanics workshops, being run from under the arches, and on the other side were a row of Victorian terraced houses screaming out to be demolished before they fell down.

There were three of us, me, Vince B and John Beverley, although some years later I found that wasn’t his real name and I know that one of them’s gone now and I haven’t seen the other for over 40 years. Anyway, it was a horrible February day, weather wise, and we were just wandering the streets, as usual, looking for something to do.

Vince put his hand into his pocket and pulled out a folded piece of paper and gave it to Beverley who opened it out and just looked at it in amazement. It was a poster from Sounds magazine which was a photo of David Bowie taken from the cover of the Space Oddity album. I looked at the picture, now this is the part where you expect me to announce that the clouds suddenly parted, the sun shone down on us and the world was alive with colour, and I said:

“What the fuck is that, are you sure?”

“Fuck off, he’s lovely,” those were the actual words that he said and he didn’t take his gaze from the picture once while he said them. It looked like Beverley was in love.

Vince couldn’t stop laughing, “I knew that you’d say that,” and I realized that he’d been waiting for a time when producing the picture would have maximum impact.

People who know me now will find it hard to believe that I was so intolerant, but that was the way it was in the early seventies if you were a 16 year old East End boy, we didn’t have young adults in those days, they hadn’t been invented.

With Vince’s laughing and Beverley standing there looking at this picture in the middle of the road I felt as though we’d wandered into a 1950’s French art film, all we needed was a black and white drunken midget firing a gun randomly and the scene would have been complete.
“If anyone sees you looking at that we’re dead,” I tried to reason with him, but he just stood there oblivious to everything else that was going on. It was actually a fact, if another group of boys had seen him looking at that picture the comments would have led to a ruck, there was no two ways about it. At that age we got used to being in fights regularly, some you won and some you lost, but I honestly didn’t see why I should get a kicking because he was looking at some soppy bloke in make up dressed like Pussy Galore in Goldfinger. This bloke made Shirley Bassey look butch.

“Will you put that away and let’s go,” I said as I walked away trying to erase the memory of what I’d just witnessed from my mind. Beverley was a bit tasty and could look after himself, seeing the way that he’d looked at that poster was quite disconcerting. I knew that he was a bit strange as he supported Man U, but you can live with that, this was taking weirdness to another dimension.

Eventually he neatly folded the picture and put it into his pocket and we carried on down the street. I’d grown up on a diet of ska, blue beat, reggae, Tamla Motown and soul, I’d never really liked mainstream pop music, and to be honest I still don’t, but my musical tastes were changing. I’d started listening to bands like Free and the Faces, and when someone played me the Killer album by Alice Cooper I began to do strange things like grow my hair and wear trainers, I did stop short of calling everybody Man, though.

Another thing that you have to realise about those times was that fashions changed quickly, especially on the streets, and if you didn’t want to have the piss taken out of you then go with the flow was the name of the game. It was a throwback to the sixties when shops down Carnaby Street dictated what the world would wear, and what was in one week was out the next, and although it was slowing up a bit the pressure was still there to keep in step.

I had seen Bowie before as a curly haired hippy singing a song about a spaceman, but I didn’t make the connection, Space Oddity had been massive in 1969 and always seemed to be on the radio. In fact, in Britain around the end of the sixties there was only one station in Britain, Radio 1, playing that type of music, unless you counted Radio Luxembourg that kept fading away which meant that if you were deaf in one ear you hardly heard any of the songs that they played.

Before I continue I would like to say that I soon lost my homophobic views and became a supporter of gay rights, so maybe seeing that picture was my epiphany even though I didn’t realise it at the time. We were in Ormond Street Shoreditch not on the road to Damascus, but it was my moment and if they ever rewrite the Bible I may even get a mention for it.

Weeks, probably months, after this event Starman was released and was vying for chart positions with the greats such as Donny Osmond, The Partridge Family and that well known touring band, Chelsea Football Team. There was plenty of music around for young girls, in fact they’d coined a new term for them, Teenyboppers, but nothing for the older teenagers who, quite rightly, thought that this music was awful, to put it politely.

Starman was a breath of fresh air and thanks to Vince and Beverley’s persistence I was even accepting the way that Bowie looked, but I was still more in tune with Alice singing about dead babies. Then came that fateful night, one Thursday evening in July David Bowie exploded into the world with his appearance on Top Of The Pops. With the amount of people that I’ve met who said that appearance changed their lives the broadcast must have had more viewers than Live Aid. “I was doing my homework when all of a sudden my dad put his foot through the tele, but I saw David just before his instep hit the cathode tube and the set exploded.” It was just the same with Bill Grundy and the Sex Pistols, and the 100 Club must have had a guest list of around 25,000 the night they played.

Anyway, I’m sad to report that the performance didn’t change my life or make me see the world in rainbow colours from that day on, it didn’t need to, my view of the world has always been colourful, as has my language. Yes, I thought it was great, and yes it was a bit outrageous, but where was the baby impaled on the end of a sword.

The music scene was moving towards more theatricals on stage and moving away from long haired hippies wearing tie dyed tee shirts and loon jeans.

Here’s my recollections with some tracks to set the scene 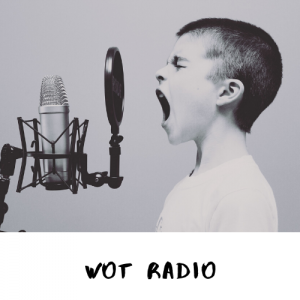 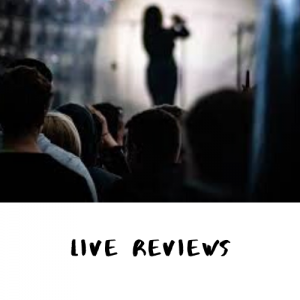 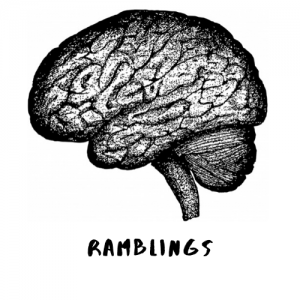 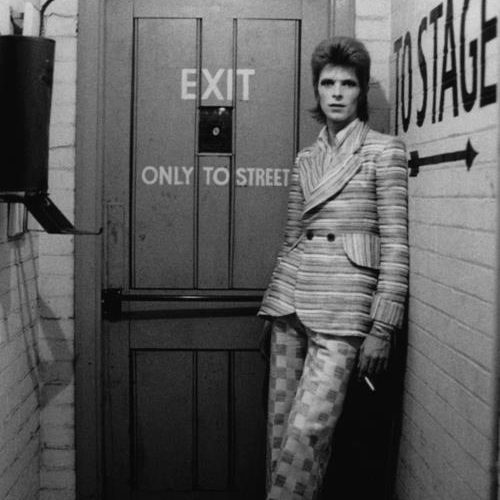