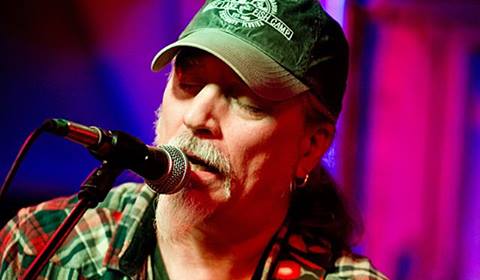 Stevie Simpson aka One Bloke One Mandolin guested on the WOT show on 22nd May 2014.

One bloke, one mandolin, occasionally a banjo. Playin’ motorcycle rallies an’ festivals since 2000.
For the last twelve years STEViE has been playing regularly at many motorcycle rallies and festivals all over the UK receiving some great reviews and picking up new fans at every gig.For a good few years he has, amongst many other gigs, regularly played/compered marquees for the National Association for Bikers with Disabilities (NABD) at their rallies and became a patron of the NABD in 2010.

STEViE’s music is gutsy, edgy and raw – a hardcore, barstool troubadour – with a voice as raw as cigarettes and single malt in a backstreet bar late on a Saturday night.

“Aside from playin’ my mandolin, writin’ songs an’ tellin’ stories I like to ride my Triumph chop or the Suzuki GS650GT I travelled round eastern Europe a few years ago.”

Bowiesque on The WOT Show