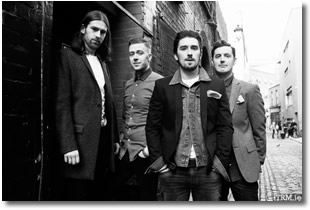 There’s no doubt that music courses through the soul of Ireland, and for a nation of just four million inhabitants it punches way above its musical weight on the world stage. Entering into the fray stride The Riptide Movement, Ireland’s newest musical export, boasting the kind of rabble-rousing, blue-collar rock ’n ’roll that should see them become the Emerald Isle’s answer to The Gaslight Anthem, Augustines and Frank Turner.

Having blown the Irish music scene wide open in 2014 with their Number One, gold-selling album ‘Getting Through’, a string of Top 10 singles and various sold-out headline tours, the four piece – comprising Mal Tuohy (vocals and guitar), Jay Dalton (guitar), Gerry McGarry (bass & harmonica) and Gar Byrne (drums & piano) – are now setting their sights on worldwide success.

“We’ve never, ever taken ‘no’ for an answer,” says Mal. “If there’s something we want to do or achieve, we just sit down and say, ‘How are we going to make it happen?’ And it happens. I think that positivity and ‘If we all pull together…’ spirit comes through in our music too.”

Having won over their countrymen, and started gaining attention in the UK with support slots to The Rolling Stones in Hyde Park (2013) and at Glastonbury (2014), The Riptide Movement unveil their debut British release with the single ‘All Works Out’.