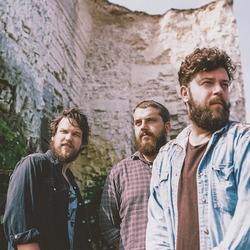 Bear’s Den release “Agape” as their new single on 11th December 2015 via Communion Records. The latest single to be taken from the band’s brilliant debut album, Islands, it follows their completely sold out European tour, which concluded with a triumphant homecoming show at London’s Roundhouse, their biggest headline show to date.

Having first appeared as the title track on the London trio’s 2013 debut EP, “Agape”, which is pronounced “a-ga-pay” and is the Greek word for love, has become a firm favourite amongst the band’s fervent fan base.

The release of “Agape” follows a staggeringly successful year for Bear’s Den that has seen them sell upwards of 75,000 copies of Islands; be nominated for an Ivor Novello (for Above The Clouds of Pompeii); and play at festivals across the globe including Glastonbury, Reading & Leeds and Secret Garden Party (UK), Lowlands (Holland), Pukkelpop (Belgium), Bonnaroo and Lollapalooza (US), BBK Live (Spain), as well as support slots with Mumford & Sons in Germany.

The band are currently working on songs for a new album, expected for release in 2016.